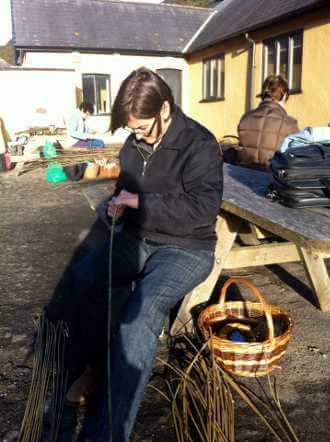 For 18 years, Sarah Hatton worked in Information Technology, but it was a job not a passion. Then a chance meeting in 2008 introduced Sarah to willow weaving and her life changed forever. Sarah made a simple willow flower and was fascinated that you could take a bundle of sticks and make it into something that was not only functional but also beautiful. Within a year, Sarah had attended eight courses and planted 2000 cuttings of carefully chosen willow to fulfil her need for different sizes and colours.

In 2012 with a myriad of baskets filling her house she set up her business, Hatton Willow, which she began to grow attending local craft fairs and running courses. Sarah started selling her baskets, willow cuttings, bundles of willow both dried and fresh and living willow.

In 2015 Sarah took the huge personal gamble to leave her career in IT to focus all her passion and energy in to basketry. Since then Hatton Willow has gone from strength to strength and continues to grow. She has been very privileged to work on some exciting and interesting projects: 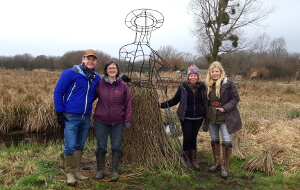 Myself and fellow willow weaver, Melanie Bastier, were commissioned by the Living Levels team to create a willow sculpture depicting someone who lived, worked, played or worshipped on the Gwent levels. We ran 3 workshops with local people to gather information about their history and the options for the willow sculpture were put to the living levels team and a female brinker was chosen. Soon after we were excited to hear from the Countryfile team who were basing one of the episodes on the Gwent levels and wanted to feature us. We were very pleased to show both Matt Baker and Ellie Harrison how we weave the willow sculpture and the programme was shown on BBC1 on St David’s Day, 1st March 2020. 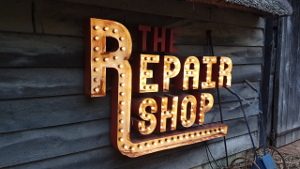 I was very proud, excited and nervous to be asked to film with the lovely cast and crew of The Repair Shop in 2018. I have now appeared on series 4 where I repaired a baby weighing scales and also on series 5 when I repaired a babies crib. I had an absolutely lovely time at the Weald and Downland living museum in Chichester which reminded me very much of my local museum of St Fagans National Museum of History. I really loved being on the programme as I saw first hand how hard the team work making the programme. 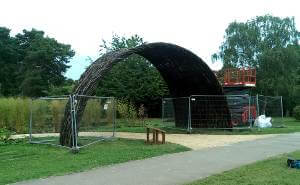 Sarah was involved in re-covering the arch with willow for the opening of the Sir Nicholas Winton garden in Maidenhead by the Prime Minister. The arch originally lined the Long Walk to Windsor Castle for the Queens Coronation celebration in 2012 and was designed by John Warland and lead by Spencer Jenkins. Melanie Bastier and a team of people were invited to give the arch a much needed spruce up for the poignant garden. 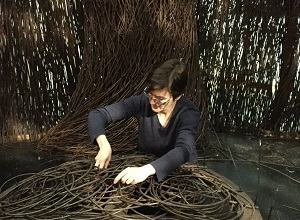 Quill nest for the TV programme Class with Melanie Bastier 2016

Melanie Bastier invited a large number of willow weavers from all over the UK to assist her in creating a large structure for a TV programme called Class which is a Dr Who spin off series filmed by BBC Cymru Wales. The structure was situated in the Llandaff studios in Cardiff and took a number of weeks to complete. The creature the quill had to burst from the centre of the quill nest which was a challenge to create and the image shows Sarah weaving a part of that section. 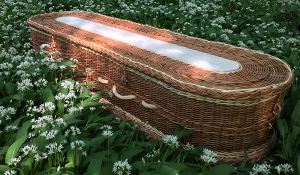 In 2016, in partnership with Melanie Bastier, Sarah setup a sister business called Lily Willow Coffins. Both women were so passionate about willow weaving they wanted to bring a unique and personal touch to willow coffins which were produced at the highest quality. They offer willow coffins for sale directly to the public as well as through a funeral director and they can be used for burial, natural burial or cremation. 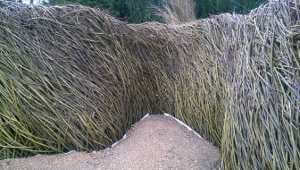 Sarah was invited by Eddie Glew to assist in creating a willow maze for the new Horrible Histories area in the grounds of Warwick Castle. Sarah spent a week working in a team with Eddie Glew to create the fantastic sculptural section of the maze. Though, at times, bitterly cold it was an incredibly rewarding experience working on a large project with such a fantastic group of enthusiastic willow weavers. 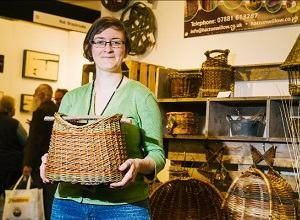 Sarah was an exhibitor and demonstrator at Made by Hand Cardiff 2015. She was very surprised and proud to be awarded the Craft Showcase award at Made by Hand, Cardiff 2015. The award was given by the fantastic Llantarnam Grange Arts Centre situated in Cwmbran. As part of the award Sarah held an exhibition of her baskets at Llantarnam Grange in October of 2016. The exhibition showcased a range of baskets showing Sarah’s journey of basket making. She included traditional welsh baskets as well as contemporary baskets using her favourite weaves, colours, shapes and techniques. 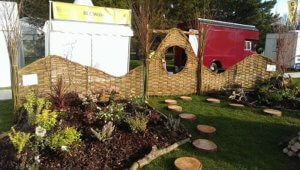 Hatton Willow were invited by Denise Leech of Greenfingers Designs in Nature to participate in creating a Show Feature Garden to represent the Hedgehog Helpline in the RHS Show that was based in Sophia Gardens, Cardiff in 2015.
Denise asked Hatton Willow to create 8 metres of willow hurdle that would create the backdrop for the Show Feature Garden. The willow hurdle would have flow and a hole in the largest centre panel to symbolise hedgehog routes through gardens. The willow hurdles were made using willow grown in Caerphilly by Hatton Willow so continuing in the theme of the overall RHS Show of not just helping wildlife but the ecosystem in which it lives. 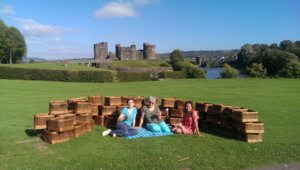 Hatton Willow were very proud to be invited by the Foreign and Commonwealth Office to hand weave 70 gift hamper baskets. The baskets would be presented to the 70 world leaders that attended the NATO Summit 2014 held in Newport, Wales and would be filled with goodies from Wales including a rugby ball, bottle of whiskey and a slate coaster.
Due to the short deadline, a team of basketmakers created the baskets led by Sarah Hatton. Each basket used 200 rods of willow so 14,000 rods of willow in all 70 baskets. The baskets were delivered to the FCO in the Celtic Manor and were filled with gifts from around Wales including a rugby ball, a bottle of wine, a slate coaster and many other gifts.
The 3 main willow weavers were invited to the Celtic Manor to meet the Prime Minister, David Cameron, who thanked us for all our hard work.

We use cookies on our website to give you the most relevant experience by remembering your preferences and repeat visits. By clicking “Accept All”, you consent to the use of ALL the cookies. However, you may visit "Cookie Settings" to provide a controlled consent.
Cookie SettingsAccept All
Manage consent

This website uses cookies to improve your experience while you navigate through the website. Out of these, the cookies that are categorized as necessary are stored on your browser as they are essential for the working of basic functionalities of the website. We also use third-party cookies that help us analyze and understand how you use this website. These cookies will be stored in your browser only with your consent. You also have the option to opt-out of these cookies. But opting out of some of these cookies may affect your browsing experience.
Necessary Always Enabled
Necessary cookies are absolutely essential for the website to function properly. These cookies ensure basic functionalities and security features of the website, anonymously.
Functional
Functional cookies help to perform certain functionalities like sharing the content of the website on social media platforms, collect feedbacks, and other third-party features.
Performance
Performance cookies are used to understand and analyze the key performance indexes of the website which helps in delivering a better user experience for the visitors.
Analytics
Analytical cookies are used to understand how visitors interact with the website. These cookies help provide information on metrics the number of visitors, bounce rate, traffic source, etc.
Advertisement
Advertisement cookies are used to provide visitors with relevant ads and marketing campaigns. These cookies track visitors across websites and collect information to provide customized ads.
Others
Other uncategorized cookies are those that are being analyzed and have not been classified into a category as yet.
SAVE & ACCEPT